An IRS wage garnishment is any legal or equitable procedure through which some portion of a person’s earnings is required to be withheld by an employer for the payment of a debt. Most garnishments are made by court order.

Wage garnishment occurs when a court order directs an employer to withhold earnings of an individual for payment of a debt.  Wage garnishments are commonly used for the collection of past due debts, including:

Background of Wage Garnishment – If a debt goes unpaid and ignored, the courts may intervene by issuing a judgment requiring your employer to “garnish” or withhold a portion of your wages to pay back the debt.  When wages are garnished, money is deducted from the debtor’s paycheck and sent to the creditor.  Garnishment is a legal remedy generally considered a collection tool of last resort.  In most states, the garnishment process can only be initiated by a court order. 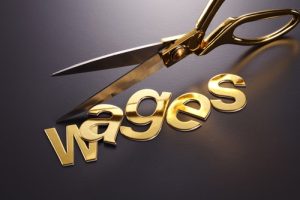 Wage Garnishment and Job Security – Under the Consumer Credit Protection Act, (CCPA) your employer cannot fire you for having a single debt garnished from your wages.  However, the Act does not prevent the employer from firing you after two or more debts are garnished separately.  If you believe you have been improperly discharged because of wage garnishments, contact the Department of Labor. You may be able to have your job reinstated. If the Department determines that your employer knowingly violated the law, civil and criminal charges may be pursued.

Before the IRS can garnish or levy the wages or paycheck of a taxpayer, they must first notify the taxpayer of such action by sending the taxpayer several letters. If you have received one of these letters, contact us quickly or hire an experienced IRS Tax Attorney at Defense Tax, so that we can take action on getting the IRS wage garnishment or IRS wage levy stopped or released. The sooner you take action after receiving the letter, the easier it is to get their wage levy released.

Many taxpayers ignore the letters sent to them by the IRS notifying them of the IRS wage garnishment or IRS wage levy. Unfortunately, when these IRS letters are ignored and no action is taken after receiving them, the taxpayer finds out that their paycheck or wages will be garnished by the IRS directly from their employer. When the matter reaches this point, the taxpayer is only a few days away from having their wages or paycheck seized by the IRS. If an employer notifies you that they have received a wage garnishment from the IRS, it is important to get a copy of the wage levy from the employer so that you can fill out the forms in an effort to reduce the amount of money that the IRS will garnish from your paycheck.

In the unfortunate event that the wage garnishment reaches your employer before it can be stopped, you should most certainly fill out the wage garnishment form that your employer is required to give you. If a taxpayer does not fill out the IRS wage garnishment form, then the IRS will take a larger portion of your paycheck. The form follows a garnishment scale so a taxpayer with a spouse or dependants will have less money garnished from their paycheck than a single person who does not have a spouse or dependants. Frequently, the amount of money that the IRS can take from an employee’s paycheck with the IRS wage garnishment can be up to two-thirds of the paycheck. Having your wages garnished by the IRS can cause a financial hardship for you, so contact a tax professional to help you avoid the problem or to help resolve it for you if the garnishment or levy is already in motion. 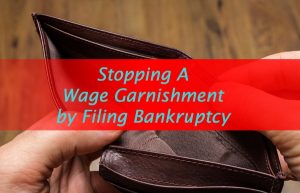 Only a certain percentage of wages can be withheld.  Employers first apply deductions that are legally required to be paid by the employee, such as federal, state and local taxes, unemployment insurance, and Social Security payments. The remaining amount is called disposable income.  The law protects employees by limiting the amount that may be garnished to 25 percent of disposable earnings in any pay period.  This limit applies regardless of how many garnishment orders an employer receives.  There are some exceptions depending on the type of debt.  For example, the law permits a greater percentage of an employee’s wages to be garnished for child support, bankruptcy or federal or state tax payments.

How much can the IRS Garnish? See the detailed chart here.

As with any legal situation, it is best to consult a qualified IRS tax attorney to determine your best options. In order for a creditor to receive a judgment, which can be used to issue a wage garnishment order, it must be issued by a court. Legally, the creditor must inform you that you are being sued and provide you with the court date so that you can appear in court or send in the required paperwork to defend your side of the case. If you were not properly informed of the court date, our attorney will be able to have the court to stop the garnishment.