How To Survive An IRS Tax Audit

We all dread having the IRS tell us it wants to reassess our previous year’s tax return. Let me start off by saying that if you’re being audited, you should probably look for help in a Tax professional. But if you’re the do-it-yourself kind, then there are certain things you can do to deal with the audit. I hope you find the tips helpful.

1. Keep your perspective clear and constant.

Almost no audits are the line-by-line examination of the return, which is what most people imagine when they think of an IRS probe. Often it is just a math error, or a mistake in the supporting documents.

Beyond that, sometimes a single aspect of a return will raise a red flag and the IRS will ask for additional supporting material. For example, professional real-estate investors can claim losses and write-offs that casual investors might not be able to. But you have to meet certain criteria to be a professional rather than run-of-the-mill investor. So if an entrepreneur makes this claim but the investment activity doesn’t fall into the range that’s typical for professionals, the IRS might ask for further substantiation of that status. 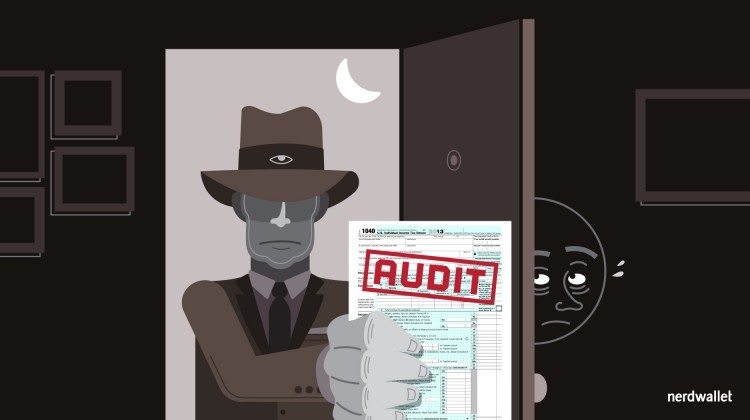 Larry Elkin, a certified public accountant in Scarsdale, N.Y., says that when he was audited, he never dealt with the IRS directly. Hiring a tax attorney or CPA takes the emotion out of it. And experienced tax lawyers and accountants can recognize when an issue isn’t as black-and-white as an agent might assert. There can be a lot of shades of gray. Your audit could relate to a deduction that’s controversial, where the IRS always tries to take an aggressive stance but where every time it’s gone to court, it’s lost. The audit agent will write up points that allege a client owes money, he says. We often argue and win because they don’t want taxpayers to appeal the levy in court and win.

Also Read: [ When And Why Would You Need An IRS Tax Attorney? ]

3. Provide exactly what the agent asks for.

Resist the urge to volunteer information. It’s ideal to provide no less, but no more than the IRS requests. The best way to get an IRS audit over with quickly is to keep it confined to the single issue initially raised. If you talk directly to the audit agents, any tidbit of information that you offer could bring things to the auditor’s attention that he might not have thought of otherwise. That could open a new can of worms.

This is another reason in favor of having someone else represent you in an audit. If I had dealt directly with the agent, I might have invited an open-ended fishing expedition. The other way the agent had to decide what he wanted to know. He asked and we answered.

Agents can make mathematical errors or overlook important documents as easily as a taxpayer can. And when laws or financial values are open to interpretation, the auditor will take the stance that benefits the IRS, the experts say. That doesn’t mean you can’t successfully argue the opposite point of view. If you donate a piece of art to a nonprofit, no one is going to dispute that it’s deductible, but you can disagree over the size of the deduction.

In that case, it’s up to you as a business owner to provide documents, such as appraisals or auction prices for similar items, to substantiate your claimed deduction. If you can do so, the agent might have to accept it or agree to a compromise number.

Because of a backlog of cases, the IRS routinely asks owners of companies that are audit targets to waive the statute of limitations usually restricting probes to the three years previous. Taxpayers have a few months to get their taxes together and the government has three years to audit them. That’s enough. You don’t have to endlessly accommodate them. The written request for a tax relief might not read like a request and it might seem as if you have no choice but to agree. Rather than be intimidated by the legalese, check with a tax adviser before responding.

Sticking to a firm deadline with the IRS probably won’t release you from an audit. The agent will finish as much as possible in the time allowed. If he’s right, you should pay the claim; if he’s not, you should dispute it. Either way, a proper response should bring the audit to a prompt close so that you can move on–and start getting ready for the next tax season.

The IRS receives a great number of tax returns every year from individuals, married couples and businesses. Thinking about the sheer number of all the submitted applications you’d think that the chances of you being audited are slim. Well, in all honesty, you’re wrong. The IRS has been doing this for a while now, and they are rather good at what they do, they have system in place that works somewhat like a filter. A filter that triggers an alert when certain items are spotted, basically stuff that is inaccurate or falsified. We all make mistakes, and it’s natural to mess up a couple of times on your IRS forms, but there are certain things that you should pay particular attention to, and make sure that they are accurate, so as to steer clear of an audit.

You should know that the IRS has gone the extra mile to know what the average wage is for the job you have. And if your income figures do not tally with what other people in the same industry are making then the IRS will want to know why.

Best way to avoid this irs audit: Honesty is the best policy. Be honest with how much you really make or you will end up on the IRS radar every time you file returns.

2: Be careful with those Self-Employment Deductions

Being self-employed means you are allowed to work at home in your pajamas! But it also means that you are likely to be audited faster than others, which is mostly because you may claim deductions and business expenses that are not related to your self-employment.

3: Keep track of those Tips and Cash Earners

It is hard to keep records of tips and cash payments that have to be reported on your tax forms. Therefore the professions that accept cash and tips will more frequently be audited by the IRS.

Best way to avoid this tax audit: The IRS agents tend to ask specific questions that will tell them when someone is hiding their true cash income. Answer truthfully and try to keep meticulous accounting records.

Also Read: [ What is a Back Tax? and How to Negotiate Back Taxes With IRS? ]

The home office deduction is another red flag to the IRS because they have stringent guidelines on what qualifies as a home office. People like to include their entire home for the deduction.

Best way to avoid this audit: Your home office must be exclusively used for business purposes and not for other activities. Read IRS Publication 587 to ensure you qualify for the home office deduction, according to the IRS.

Business losses for the first one or two years are common when you are self-employed or a sole proprietor. But if you are still claiming losses 3 years later after being in business for 5 years, the IRS will begin to wonder if you really own a business or if you are just writing off a hobby to get more deductions, according to Learn Vest.

Best way to avoid this tax audit:Have all your business documentation so you can prove that you made a profit.

It is just a fact of life that the more money you make, the more likely you will be audited by the IRS. People will make more mistakes or underreport the amount they made on tricky tax returns when they are in higher income brackets. Also, the IRS will get a higher payoff when auditing these tax returns.

Best way to avoid this tax audit: Ensure that you report all income and have the forms to back it up. Also, use the right tax forms and fill in all applicable fields.

7: Failing to Report All Taxable Income

It is easy to misplace a decimal point or add an extra number to throw off all your income figures. Yet if your tax returns don’t match the W-2 form or 1099 form sent to the IRS by your employer, the IRS will audit you, according to CBS News.

Best way to avoid this tax audit: If there is an error on your W-2 or 1099, have the employer send the IRS the corrected information.

It is easy to try to claim as many deductions as you can to get a bigger tax refund. But if the deductions are too large in comparison to the amount you earn (such as claiming $17,000 in expenses but only reporting $23,000 in gross income) an audit will happen.

Best way to avoid this audit:If you can claim the deduction and have the documents to back it up, then put it on the return. Don’t take a deduction that you can’t prove.